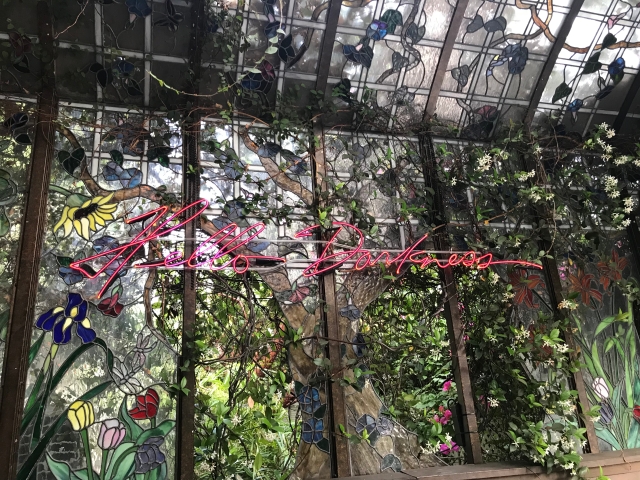 On Wednesday, our trip to Japan began!

We left Santa Barbara on Wednesday night and spent the night in LA to be closer to LAX. Because of my dad’s connections with everyone in California, we were able to get a free night at Le Petit Ermitage, a hotel in West Hollywood which is basically vampire-themed (the main photo of this entry is from this hotel). Because of this, we were able to get to LAX with plenty of time to get through security and whatnot. As we waited for our 12-hour flight, we got some breakfast and enjoyed our last American breakfast for a while.

Once on the plane — which was a newer plane and had great entertainment options — we settled in and began watching movies. Matthew and mom both watched Marley + Me and SOBBED (why would they watch it??? They’ve both seen it before!!! We just had Rex die!!! WHAT A BAD IDEA), while I watched Coco (genius) and Jumanji (surprisingly funnier than I thought it would be). Immediately after Jumanji ended, my headphones broke, and I spent a majority of the rest of the plane ride staring at the “are we there yet” map that flashed on my screen. Since the person next to me was sleeping, I didn’t want to turn on the light to read either, so, instead, I counted down the hours/minutes until we got to Tokyo for the last 3 hours of our flight. 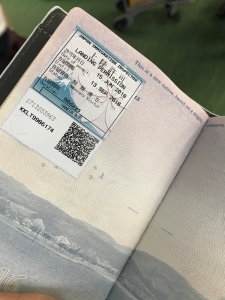 You get a very pretty sticker of Mount Fuji when you go through immigration.

We flew into Haneda airport (which is closer to the city center) because it was closer to our hotel than the Narita airport, and were able to move quickly through immigration and customs. In the immigration stop, we had a trainee who did not speak English and was very concerned that we came into the booth at the same time but didn’t know how to tell us to come in one at a time. Also, when you come to Japan, they take a photo of you, and after ~24 hours out of the house, we were all looking a bit like trash. Sorry, Japenese government.

Finally, we were out of the airport and into our taxi where we discovered that the Japanese follow the British-style driving rules (driving on the left side of the road). 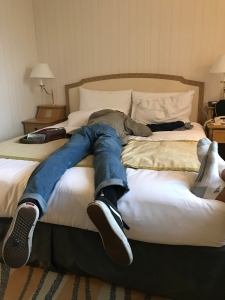 Matthew passed out before dinner for about an hour. Here is what he looked like.

Once we got to the hotel and struggled to stay awake, we had a quick dinner at the hotel with our group, where I had lotus root, grilled zucchini, and some of the best asparagus I’ve ever had.

Since Matthew and I were about to pass out, we left early and fell asleep just a bit before 8:30 PM, and were able to sleep a full 11 hours. Stay tuned for my next entry (which will be much more exciting) on what we did on our first full day in Tokyo!