Hi friends! I have been updating my blog recently with just plans and random, general class information but now I believe that it is time for story hour, aka a bunch of the random things that have happened since I have been back but don’t merit their own subsection of the blog. The following are a bunch of short stories (ripe with photos this time, I promise!) of my interactions with Frenchies, my own awkwardness, my conversations with my (extremely numerous) stateside friends and of course, my undying love for my economics professor.

1) Sometimes when the French re-title American movies, they keep the titles in English but

completely change them. There are two really fantastic examples of this, which I laugh at whenever I see them. The first of which is “Bring It On”, a classic 90s movie about two dueling cheerleading squads, which they call “American Girls” here in France. The second is my mom’s favorite movie, “The Hangover”, which Frenchies call “A Very Bad Trip”. You just can’t make things like this up folks. Check this pictures in case you doubt me.

2) The (one sided) saga with my economics teacher that continues every week in our Monday class. Sure, we have never actually talked except for me saying “merci” to him once and then freaking out and running away when he responded to me in French…but I feel like we will be best friends. Or maybe I will just continue to think that he is looking at me whenever he brings up America or things that have happened in America, and then continue to pretend to be offended whenever he says something bad about us. But in my heart, I know that he doesn’t mean it. Je vous comprend!

3) One night at The Beers (yes, there is a bar literally called “The Beers” in English. Guess what? They have 50 types of beer there! Big surprise. Also, their tagline/catchphrase/whatever is “once upon a time…” Not sure what that’s about. Oh 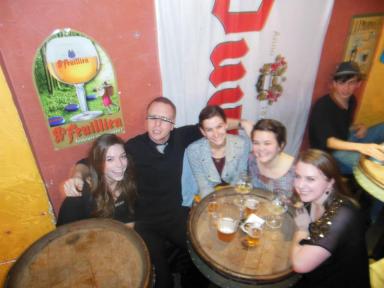 well, anyway…), my friends and I were minding our own business in the back of the bar, speaking English and drinking responsibly (hi relatives), when a random French man came up to us and asked if he could borrow my sparkly headband for a minute “for his friend.” Really unsure of what that meant, but also extremely curious, I gave it to him and watched the ensuing take place. Man who asked me for the headband gave it to his friend who then wore it on his head, his eyes and then as a necklace all while his table erupted in roaring laugher and while taking pictures. So, of course, we needed to get in on the action and get a picture with this cool dude. And everything worked out in the end because he just went back to his original table and we continued about our business. Solid!

4) The first day I met one of my new friends here in Lyon, we went shopping for dresses that we could wear to the Opera (since this is a goal I have had since I have arrived in Lyon in September). So, of course, like true Americans, we headed over to Zara and I instantly found the most beautiful forrest green dress with gold and black accents that look super cool (there will be pics of when we finally do go to the Opera, so stay tuned!). But as we went into the dressing room to try things on, we have to swipe our bags against a detector to see if we had stolen anything in our bags, and my friend’s kept going off even though she had nothing in there. So after an awkward ten minutes of all of us trying to communicate in French and them going through her bag, we were allowed into the dressing room area without a problem. Then, after we bought our items, we tried to leave the store but alas, the detector went off again.

The man going through her bag kept asking her if she had bought her bag at Zara before, or if she had anything in her bag from Zara, and she awkwardly said yes when she hadn’t, and then hilarity ensued as we all tried to communicate in French while not understanding each other at all. He continued to lurk through her bag until he found a pack of gum which he looked at and then asked “chewing gum?” After an awkward exchange of looks and head nods he asked if he could have a piece. “…Oui?” she replied. And so he took a piece of gum and then let us leave the store. I guess the moral of the story here is that anyone can be bribed if you have enough gum to hand out.

5) One day in my History of Lyon class, we had a new professor (we have new ones every two weeks), and none of the international students were listed on of the roll sheet so we had to spell our names for the professor as he wrote them down. I have never really mastered the whole “pronunciation differences” between O and U (and E is just impossible. They all sound the same. Sorry), and since my name has all three of these letters…it was a struggle. And then he asked me my first name and thought I said Marie. Nope, sorry sir…I just can’t speak French ):

On a less awkward note, we went on a field trip and saw a bunch of things that I have seen before, but it was cool to hear his short little stories on everything. We walked down this really steep path from the top of this huge hill which overlooks all of Lyon, down to one of the rivers of Lyon and were able to see all of these old Catholic “monuments”? “Relics”? Not really sure what you would call them, but the view of it when we were at the bottom was beyond beautiful. I shared a picture with you so you can join in on the oohing and ahhing I did.

6) I have also begun to frequent an Indian fast food type of place in Vieux Lyon (my favorite part of Lyon) and the people who work there now know me! The first time we went, they spoke to us all in French people we spoke French to them, but the second time we walked in we were greeted by them in English and with one of them saying “New York!” After a few minutes of confusion, I asked “Oui? Donc…quoi?” And then he said “That’s where you’re from! New York!” Again, no sir, that is not where I am from. I’m from California… But at least they know who we are! Maybe one day they will give us free soda or maybe some free naan (which would be a dream come true). The guy who works there can also say “very nice” in English but he really does sound like Borat. It’s awesome, and I can only hope he will be my friend~~

7) Last night my host family was talking about the passing of the marriage for all law, and some of them were okay with it and others weren’t and it was really interesting to see an actual French fight. And, this is dumb to say but, French people argue exactly the same as Americans (with less punching / threats of physical violence)! But the cadence and the “LET ME FINISH” was all in the air. It was interesting to hear their views on it, since we are having the same sort of situation happen in America. I think the difference here in France is that there are a lot more protests on both sides of the matter, whereas in America people would just take to the internet instead of actually going outside. But maybe that’s just because I haven’t been to any protests of any kind in America and just sit inside on the internet all day.

But back to their fighting, it was really great actually! I loved seeing people care about issues, and the way they interacted with each other was just like my family interacts when some of us don’t agree with the others. There was just a moment where I flash backed to a random argument between me and my brother where we said almost the exact same things they were saying (not about gay rights, but instead about where we should go for dinner. But the “LET ME FINISH” and “I’M TALKING RIGHT NOW”s were ever present).

8) Speaking of home, I have been keeping up to date with my fraternity, Delta Sigma Pi, while I have been in France because I really am beginning to miss all of my friends at home, and being involved with the fraternity. Since there is not much work to do 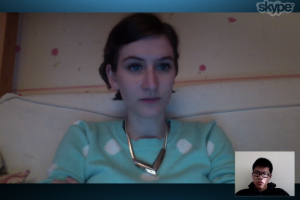 here, unless you want to sit in the library attempting to decipher French (which I never, ever want to do), I spend most of my time on the internet looking at all the fun adventures people are having at home. Well, not really, usually I am out in the city BUT when I do sit on the computer and look at everyone else’s fun times in the states I get sad. So, in an attempt to stay involved with everyone, I have been conducting Skyping interviews with all of the winter quarter pledges! I never liked having to do interviews in the states because its so much more awkward to be forced to talk to someone you don’t know when they are nervous and in front of you BUT doing them over Skype is great because (mostly) all of the interviews have been interesting and it’s been nice to “meet” everyone who might be in the fraternity ~very soon~. It’s my little tie to Irvine, and since I LOOOOOOVE talking about myself (not really) I get a lot of opportunities to do that with pledge interviews, hahaha. There have also been a lot of great opportunities for awkward screenshots where I look crazy (see above).

Okay, that is all I have for now! Just one more quick note; I am going to Geneva this weekend for Friday – Saturday because train tickets were only 25 euros, round trip, and my friend who I am going with has a friend there so yay free housing! This will be a nice, somewhat cheap trip, and then we can get ready for our crazy adventure to Madrid, Barcelona and London later this month (which will just spend all of my money and I will be really poor) (which will be just in time for my friend from America to come visit me in Paris and Lyon). Alright, until next time mes amis!

One thought on “Story Hour”